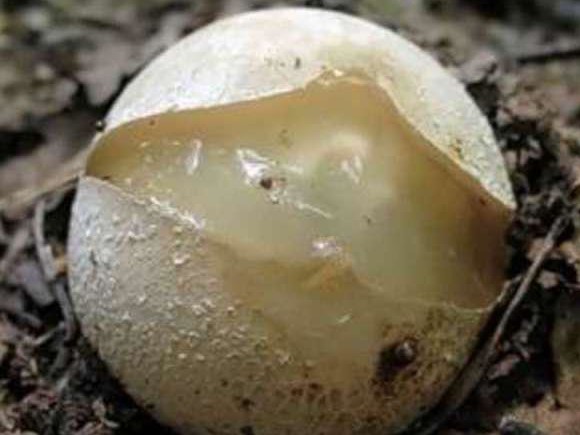 Previous item Veselka common Next item Fungotherapy or why ...

This amazing and unique mushroom is called differently: in Polissya it is called pannoy, pannoy-Anna, in Russia, Belarus - gay, and also - "fucking egg","the devil's eye","shameless shameless","with a thunderbolt","wolf egg","earth oil". In the world of mycology, this mushroom is known as the shameless falus - Phallus Impudicus.

The Falus family belongs to the class of gasteromycetivs. Their fruiting bodies are globular, pear-shaped, or tuberous - often like amazing flowers with a strong, unpleasant odor. Some of them are well known to you, these are raincoats, florid, and less known ones - scleroderma, earthen star, melanogaster.

Mid June. I travel with a basket along a green forest road - where a pink russula happens, somewhere - a spikelet, an umbrella can be seen on a high leg, a real chanterelle turns yellow over there, near the pines - a couple of butter, not a lot ...

Suddenly the wind brought a familiar smell pannys - this year it has not happened to me yet. If you hear a smell, look for a mushroom within a radius of 10-20 meters, although sometimes the wind brings this "aroma" from afar. Then you go to the smell: to the right - to the left, forward - backward, it smells - it doesn't smell ... Here she is - a beautiful panna, and the flies have not yet overcome, just sprouted ...

And next to it - an egg, a little further - a dozen more, hid in last year's foliage. Crouched at the largest: through a thin skin, a green-olive head with a white rim is already visible.

This fungus grows from the mycelium (mycelium) and at first resembles a small 6 knot. In three weeks, it grows to the size of a chicken egg and then appears over last year's leaves.

ABOUT! Cracked! A minute or two later, a dark olive head with a white button - an eye - looked out of the egg and looked at me in surprise ... “What's so surprising? - as if asked, - I am growing rapidly - 6 mm per minute ... ”Now the leg has appeared above the egg. Noise-creak - and for 5 minutes before me in all its glory stood panna - the miracle mushroom of our forest. On a 30-centimeter white, spongy hollow cylindrical leg, a cone-shaped waffle dark olive hat covered with slippery, honey-sweet slime sat proudly.

It will take 2-3 hours - and the flies, attracted by the strong smell (not quite pleasant) and sweet taste, will spread and sow mushroom spores. And after another three to four hours, the beetles will eat the "earth oil" and the white leg, and the life of the mushroom will end.

... While I watched the growth panty-veselka, then she had breakfast in the forest - she wiped one testicle, grunted and washed down with water. Egg-stage mushrooms are edible. In some provinces of France, they are eaten with sour cream. Young eggs are odorless, and crunch like a radish. This is the best prevention of cancer and viral diseases. If you are fortunate enough to collect a lot of panna eggs, you can freeze and defrost them raw. Do not re-freeze. I advise you to eat one egg a day.

The healing properties of the pant-veselka we still have to study and study. The fact that in folk medicine these fungi treat cancer, skin diseases, diseases of the joints has been known for a long time. Panna tincture, according to the latest research of the Kiev Center for fungotherapy, bioregulation and Ayurveda, helps to overcome stressful situations. Although a person is worried, the body does not react so painfully to stress: pressure and sugar remain normal. Panna tincture also helps with radiculitis, intervertebral hernia, treats ulcers of the gastrointestinal tract, it is used for cardiovascular diseases. It is also known as a means of restoring fertility - both in women and in men. It is not for nothing that it is called veselka - it is a strong aphrodisiac (an aphrodisiac), but it does not act at the same time, but gradually, but it cures sexual problems forever.

Tincture of the vesicle can remove the fright in children, having smeared the child at night several times on the lymph flow.

My friend, namesake Lyudmila, with whom we often go to the forest, once told me: “My granddaughter came from Moscow - the winter was cold, I caught a cold on the train: fever, swollen lymph nodes ... Evening, Friday. I did not call the ambulance, gave a spoonful of tincture and rubbed it with panna. Until Monday, there was no trace of the disease ... "

And 30-years of experience in diagnosis and treatment pannoy, which accumulated Nikolai Ivanovich Guban from Osikovoi Kiev region, in general unique. It helps people heal from many diseases.

Finally I want to warn those who collect pannu and he himself prepares a tincture from it: do not fill it with strong vodka. Mushroom heals, not alcohol! In ancient times, our ancestors used wort for this, and this is only 18 degrees.