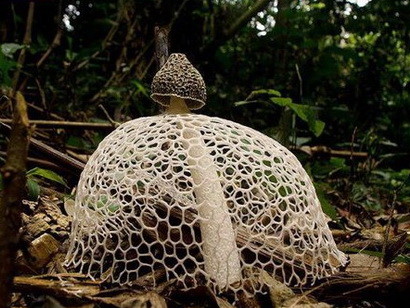 Previous item Why does he treat the mushroom mushroom?

Veselka is a unique mushroom

Veselka - the mushroom is amazing, it can be compared with the legendary fern flower, which is searched for on Ivan Kupala in order to find the treasure with its help. Veselka they are looking for about the same time and also for the sake of the treasure - only healing. Healers and modern physicians argue that there is no more effective medicine against cancer and any benign tumors than the common veselka. Very, very few knew about this mushroom, but with the development of the science of the medicinal properties of Fungotherapy mushrooms, its popularity is growing every year.

Young Veselka is an egg-shaped white body (popularly called the fungus "fucking egg"), and it is very difficult to detect. This mushroom loves, perhaps, all the same coniferous forests, although you can meet it anywhere. What is surprising is the capriciousness and unpredictability of this fungus. He never grows in the same place.

The time when you can see the fun also cannot be defined precisely. This mushroom can be found in April and October. Usually the fun is not very large, rarely when it grows to the size of a goose egg. At the beginning, the mushroom is very similar to an ordinary raincoat. By its structure, it resembles an overripe plum or a lump of non-spread jelly. Growing to a certain size in a sufficiently long time for an ordinary mushroom, about a week, the mushroom begins to show wonders. A small kidney hatches from it, which quickly transforms into a fruit stem, and this leg begins to uncontrollably strive upward, like a living creature. A leg with a cap grows out of an egg very quickly, sometimes in 15 minutes. This mushroom is the fastest growing mushroom - the results are amazing: 5 mm per minute!

Fruit body reaches 30 cm in length, has a long, thick, inside an empty fragile leg and a cap covered with brown-green mucus. The mucus of the hat contains spores and produces a disgusting smell, attracting flies that carry these spores. So this mushroom will stand for several hours, after which only a wet place in the most direct sense will remain of it.

Story of a mushroom picker

Very interesting about the oars was written by a wonderful author, a great lover and connoisseur of the "mushroom kingdom", Oleg Chistovsky: "Leafing through the book of Y. Clan" Mushrooms ", I saw in the figure a mushroom called commonweal and remembered the amusing incident associated with him from his wandering life as a field man.

We conducted a topographic survey of the northern foothills of the Main Caucasian Range. His permanent camp was arranged on the elongated lawn of a spacious valley. Somehow at the end of the day, returning from the next hike to the mountains, I noticed a light beige egg near our pointed tent.

“Look,” I said to the cook Ivan Gerasimovich, “some bird has laid an egg.

“I thought so too,” the cook chuckled into his lush reddish mustache.

Getting accustomed, I was convinced that this is really a mushroom. Southern twilight came quickly. The mountain valley was covered with a giant cap. We had supper and climbed into sleeping bags. In the morning I woke up at seven o'clock and left the tent. In front of me, as if at attention, a few ungainly mushroom stretched out on a thick mesh leg and in a mesh wrinkled cap.

- And it's not a raincoat at all, - said Ivan Gerasimovich, who came up to me.

- Rather, it looks like a morel. Look how I swung it overnight. There will be twenty centimeters!

I sat down near the tent on the box and began to paint on the plan relief, from time to time looking at the mushroom. On the mucous surface of the cap-kichki village fly. Immediately another woman joined her, and soon a buzzing muscular swarm swirled over the mushroom. Pushing, flies clothed the whole cap. After breakfast I came to look at the mushroom. Dark droplets dribbled from his sagging, flabby bonnet. After some time I again visited a strange mushroom. The hat slipped completely, and the hollow leg cracked and began to turn black.

- Yes, it's some kind of toadstool, - said Ivan Gerasimovich, who was watching him.

“And the smell is disgusting.” He wrinkled his nose and walked away.

Just before leaving for work, I decided once again to take a look at our chameleon neighbor. From him on the grass there is only a dark spot. The life of the fungus lasted only a day! ”

Hilarious belongs to the fungi Gasteromycetes, growing in the tropical and subtropical belt, but prefers to live in the temperate zone of the northern hemisphere. It occurs in South America and Australia. The most common in Europe. In the directory "Mushrooms of the USSR" it is indicated that you can meet the ordinary joke in Central Asia, Kazakhstan, Siberia and the Far East. In the egg stage, this mushroom is recognized as edible, although not of high quality.

Veselka growing in Western Europe, and since the interest in medicinal mushrooms abroad is now incredibly high (fungotherapy - the science of medicinal mushrooms is considered the era of new discoveries), the veselka got on the laboratory table. And it became a sensation! Veselka polysaccharides really kill cancer cells: they make holes in their membranes and the cancer cell simply dies. In our Center for fungotherapy, bioregulation and Ayurveda, cancer patients are assigned Veselka together with shiitake. Shiitake basically cleanses lymph and blood from tumor cells, and the jelly works directly with the tumor. Especially shown a fun for all tumors of female organs and malignant, and benign.

For example, fibroids and fibroids in two months shrink in size by almost a quarter, resorption of hardening in the chest.

The case of Badmaev and the Empress

By the way, the famous court physician of Nicholas II - Badmaev treated gay all tumors, including the queen. So much slander and gossip was poured out on the healer! It was said that he allegedly specially drunk the king in order to completely subordinate the queen. Human stupidity and anger practically ruined the entire legacy of Badmaev - his archive was confiscated and partially destroyed, sitting in the fortress, he regretted the recipes for medicines from Russian medicinal mushrooms, the records of which were destroyed. The sensational and false story of the "false hysterical" pregnancy of the Queen by Badmaev is explained in a completely different way. As you know, the queen really wanted to give birth to an heir, but girls were born from the first four pregnancies, and then pregnancy did not come for a long time. Finally, the queen's stomach began to enlarge and the cycle was interrupted - she announced to the doctors that she was pregnant. But this turned out not to be so, the doctor Derevenko explained the changes as "hysterical pregnancy" and at this he stopped the consultations. Badmaev was sure that a huge cyst had formed on the ovary, but the operation was impossible, since the queen was still obliged to give birth. They decided to dissolve the cyst by any other methods. Then Badmaev used ... vesicle ordinary and several Japanese mushrooms. And everything worked out - the queen was able to give birth to an heir.

Tincture Veselka heals any wounds, ulcers, for example a stomach ulcer, trophic ulcers. It is very effective to apply a vesicle to a different kind of cancer ulcers, bedsores, well treats an erypsipelas, panaritium, skin cancer.