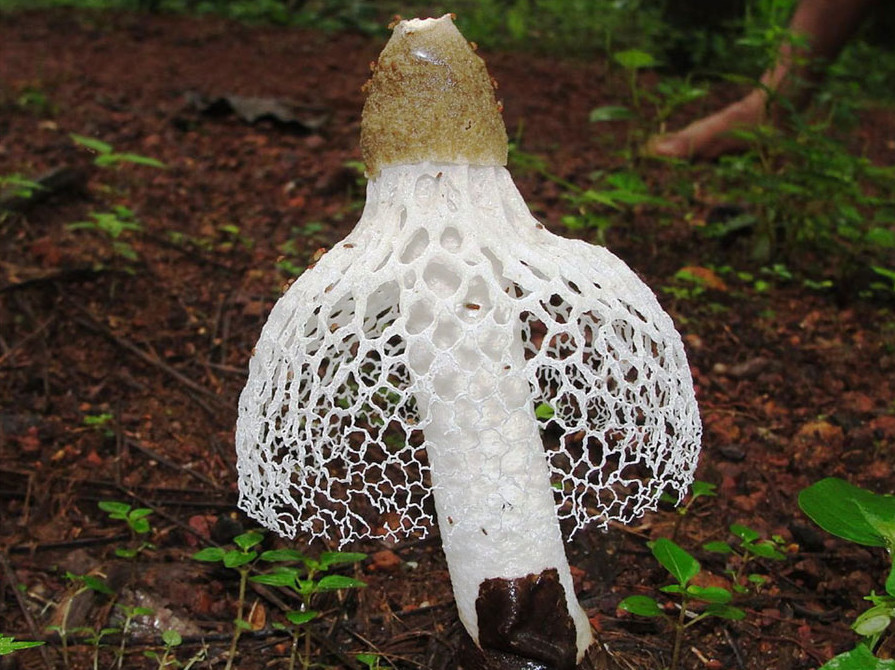 Previous item Fungotherapy or why ... Next item Mushroom Veselka - tincture ...

Our Funny ordinary there are famous relatives, the same mysterious and unpredictable. One of them - Campanulate Dictiophora, known under different names: setkin, the lady with the veil, the ghostly widow, the devil's bride. There are also a lot of legends about its healing properties - in general, one to one. So, in the countries of America, it is believed that meeting the devil's bride is the same as finding a fern flower - she points out buried treasures and heals diseases. But if a person is obsessed with passions, then he may die, seeing this miracle. It is not known what later happened to all who left a description of the amazing "widow", but none of them died on the spot from seeing this amazing phenomenon. Although in some cases it was really a satanic obsession.

A very interesting description of the netkonoski was left by the German traveler and writer Richard Krumbholz, he happened to observe the mushroom in South America. “I got out of the thicket into a clearing,” Krumbholtz recalled, “and almost stepped on some strange egg. It was pure white and stood out clearly against the green mosses. At first I decided that I had found a nest of the gokko, a capercaillie of the Brazilian forests. But then he changed his mind: not a single bird would lay its eggs directly on damp moss. Could it be the egg of the lizard - a giant lizard?

The mysterious object was elastic to the touch and covered with a leathery shell. I was about to pick it up and take a closer look, when I suddenly noticed that the egg ... was growing. It increases in size before our eyes. A thin crack split its shell and ran further, splitting it into two hemispheres. The edges of the cracked skin on the top of the "egg" parted, and a bright orange lacquered hat crawled out of the gap between them, or rather jumped out. She sat on a long snow-white neck. The neck quickly stretched out: every minute it increased by five millimeters! What is this thing: an unprecedented beast, bird or plant? Finally, the outlines of the mysterious object were defined. It was a mushroom! Straight like a candle, on a slender snow-white leg, in two hours it stretched out as much as half a meter in height. And suddenly a new miracle struck me: an openwork white coverlet jumped out from under the orange mushroom cap with a crash. It fell almost to the very ground and, like a wide crinoline, surrounded the leg of an amazing plant. At the same moment, a strong disgusting smell of falling began to spread from the forest miracle in all directions. One by one, flies and moths began to gather at the smell. In a few minutes they were already hovering around the "fragrant" mushroom in such quantity that I had to step back.

Meanwhile, twilight fell on the ground. Many of the nocturnal insects hovering around the mushroom have lit small lanterns on their bodies. And the mushroom? The mushroom also glowed - a bright emerald glow streamed from under its hat. The coverlet also shone with a delicate matte sheen. The next morning I came to the clearing to look again at the outlandish mushroom. But alas! I found only a small lump of mucus here - all that remained of the wonderful plant. Later, I learned that the mushroom, which blossomed so quickly and magnificently in front of me, is called by the locals "the lady under the veil", and the scientists - campanulate dictyophora... There are many different fables about him among superstitious people. They say - woe to the person whom he attracts with his light. But I never had to regret that I spent almost the whole night admiring this rare natural phenomenon "

This family surprises mycologists with a truly satanic ability not to reveal their secrets. Ordinary wax, diktifora and their cousins ​​from the raincoat group may appear where they have never grown before, and where they will never grow again. Such a mushroom grew once - and disappeared forever. Here is what the doctor of biological sciences A. V. Smirnov reports on this matter. “An interesting story happened with the Setkonoska (dictyophora) in September 1933. E. Markidonova, a student at Tomsk University, came across an outlandish plant in the vicinity of Tomsk. And not just a single specimen, but a whole plantation. She rushed to the university with all her might. Reported to Professor N. N. Lavrov. Together they immediately rushed back. The slightest delay could turn into failure. The mushroom lives only one day. At 9 pm the "egg" bursts (like a joke) and a leg with a hat begins to grow. At 8 am, the mushroom already emits a sickening smell of falling. It's over at 9 am. The Tomichi were on time. We dug up some of the tiniest "eggs". They took me to the university. Planted in the garden. For ten days curious townspeople watched the tropical splendor in the center of the taiga region. From the top of the mushroom caps onto the lace "skirt", viscous drops of green jelly dripped down. A mass of green spores floated in this stream. The excess dripped to the ground. Flies instantly mastered the bait and curled around. And even the pieces of rotten meat that were laid around did not attract their attention. But then the last mushroom - "flower" has blossomed. The last "skirt" unfolded. And the extravaganza faded away. The prudent botanists covered the ridge with a thick heap of fallen leaves, twigs of aspen, birch and bird cherry to give the mushroom food and protect it from frost. Although the snow in Tomsk is deepest, an extra precaution does not interfere. The natural plantation was monitored. Alas. The next year, neither in the garden, nor in the aspen forest (where they first found) did not appear in one "skirt". Not next year. Not a year later. The netska disappeared as suddenly as it had appeared. Where did it come from? Why did you disappear? Professor Lavrov suggested that it grew in an aspen forest on the site of a rotted fall or heap of manure, but whether this was so, naturally, no one could confirm. Found once on an expedition in Altai, the same unique. Until they figured out what to do, everything disappeared.

After the war, the botanists of Irkutsk University met setkin on the Baikal. Rushed for pencils to capture in colors. Returning, nothing was found. It's good that even Lavrov managed to draw this amazing creature. But where and when the mushroom-flower will appear next time, no one can predict. " 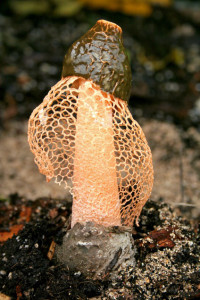 A similar thing happened at the beginning of the century in Hawaii. Suddenly sugarcane began to die from root rot. Found the reason - Cheerful reddish... The palisade of her stinking hats rose above the piles of rotten reeds. There were also lacy "skirts" of net-socks as high as a potato bush. Swarms of flies hung over the reed plantations, and it was unclear which was more - mushrooms or reed stalks. Alarming signals came from all the islands - everywhere, mushrooms filled the reed plantations. It seemed that the fate of the sugar plantations was a foregone conclusion. We were already preparing to replace the cane with another culture, when suddenly the obsession disappeared. At once both the merrymaking and the nets disappeared. After that, botanists searched for the extinct species of mushrooms on the islands for a long time and only thirty years later they found one netnose!

Another member of the merry family is bright crimson Grate red suddenly appeared in the greenhouses of the Botanical Institute of the USSR Academy of Sciences in Leningrad, although no one brought him there. The appearance of the mushroom is clearly tropical - something like a rounded basket with large holes. In the journal "Science and Life" 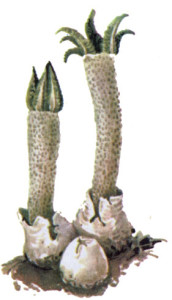 there was a report that in 1976 in the greenhouse of the Dubsky state farm, Sverdlovsk region, a mushroom appeared on the cucumber beds, which confused not only the workers of the state farm, but also specialists. And there was something to be surprised at! Strange creatures grew among the cucumber whips: on top of a tall and thick white spongy stem were six blackish-greenish worm-like processes. It turned out that this is an alien from the tropics, a close relative of our merry-go-round, with the same pungent unpleasant smell as hers - Lizard Grander... The homeland of this mushroom is the island of Ceylon. With tropical plants, it was introduced into greenhouses and botanical gardens in England, France and some other Western European countries. This mushroom has been discovered in Russia for the first time. How he got to the Urals is still a mystery. 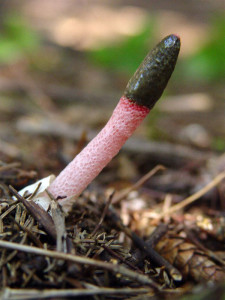 We finish the story of the wanderings wanderings a note called "Another relative of raincoats." Its author E. Vimba writes: "This is an unusual fungus-raincoat, Mutinus Ravenel - a close relative of the common fun and canine mutinus, for which he was taken for a long time. Mutinus Ravenel turned out to be a neighbor of man. It was first found in the fifties near Riga. It grows in yards, on lawns, in the beds, among flowers, its homeland is North America. It was discovered in Europe in 1942. Mutinus Ravenel turned out to be not so rare in our area. Small families of this exotic mushroom can be found on the Karelian Isthmus in the vicinity of Priozersk and Vsevolozhsk. Here is its original appearance: a white pointed column the size of a child's little finger. The very tip is crimson, as if dipped in cinnabar. The mushroom looks like a short colored pencil. "